Aquanesia is a location-based game and performance set 100 years in the future where players test their skills at different watershed-based activities that reveal clues needed to unlock the mystery of how and why people are getting Aquanesia, a form of amnesia that makes people lose their memories of the past century. 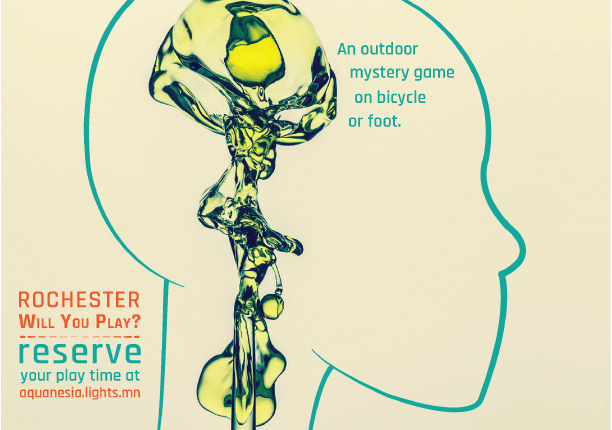 The goal of Aquanesia is to create a fun-filled, bicycle based activity that gets people outside to play, learn and reconnect with their city and its natural environment.  During the process of solving the mystery game, players will become familiar with specific aspects of the local environment as well as key principles about the Zumbro watershed and clean water. The intended result of the game is that players are encouraged to become ever-better stewards of their watershed.
Rochester Art Center is situated on the Zumbro River and its trails, so RAC is perfectly located to host a fun and educational art event that activates the trails, river and its watershed. We know Aquanesia will stimulate diverse engagement with the river as an invigorated community resource.
Aquanesia is located in several locations around Rochester including Slatterly Park, Silver Lake Park, Mayo Memorial Park, Rochester Art Center and other areas connected by bike path along the Zumbro. The game is best played on bicycle as the course is roughly 7 miles.
As they navigate the landscape, players will encounter six activity stations where local actors play live characters such as the Beachcomber, the TaxiBoat Driver, the Carp Hunter and the Science Teacher to animate the fictional world of Rochester in 2118. These characters will facilitate fun physical tasks, puzzles and challenges that players must complete to gain clues to solve the mystery of Aquanesia.
Aquanesia is developed by the Twin Cities-based arts agency, Northern Lights.mn in collaboration with Rochester Art Center and Zumbro Watershed Partnership, a member-based, nonprofit organization dedicated to helping residents “Clean, Protect and Enjoy” the lakes, rivers, and wetlands in the Zumbro River Watershed.
Aquanesia is on Saturday, October 6 and Sunday, October 7 from 10 am – 3:00 pm Teams of 2-5 players must sign up in advance for a specific time slot (Saturday or Sunday) through EventBrite on the Aquanesia website, http://aquanesia.lights.mn. The cost is $10 per team. Families are welcome! Game activities are most appropriate for ages 7 and up.  Playtime is 2-3 hours. Bikes are available to sign out at check in.
Funding for Aquanesia comes from an Arts Touring grant from the Minnesota State Arts Board. Aquanesia is also being presented in Grand Rapids, MN in September.
For tickets visit:  aquanesia.lights.mn
X
X